Possibly the wettest I've seen Sell Gill! When we first arrived at the cave, the wet entrance was looking rather severe, but passible and I suspect you could probably have got a fair way down. But even the dry entrance had a nice waterfall going down it. We arrived just after another group who kindly asked if we wanted to go first as they had a novice with them. We had been planning on getting Max to rig, but for the sake on efficiency on the entrance pitch I quickly rigged the entrance, being simultaneously surprised and glad to see an in situ sling for a deviation, which pulled you just far enough out of the centre of the waterfall to not get completely drenched. Then on to Max rigging the second pitch which was done very nicely, and he descended down it. By this time the rest of the team had joined me at the top of the second pitch, however, when it came to my turn to follow Max down, I decided to stop just above half way down as a waterfall joined the pitch and the bottom half of the rope descended right into it. Despite looking I couldn't find a deviation or other way of avoiding it, so came back up, with a very soaked Max following shortly after.

After this we went and explored the crawl that comes off the bottom of the entrance pitch. I've explored this before, probably in dry weather and never seen water in it. Now there was a good stream running through it. After a few minutes of crawling, scrambling, stooping and a half a second of walking, we reached a ~6-7m drop with rather smooth sides. Some of the others thought there might be a way down it, but I think I would have felt happier had we had a rope for it (and I wasn't going back to the entrance to get one!).

When we arrived back at the entrance a third group was on their way down the entrance pitch, so we sat and had some chocolate, before bemusingly watching them go to rig the second pitch. As we then started to head back up, it emerged that both of the other teams had clipped into our karabiner in the deviation. I derigged and offered the team coming up behind us if they wanted me to clip in one of their krabs into it for them, "nah, we'll be fine, it's not too bad". As I finished derigging, the first of their team appeared at the top looking utterly drenched. Then a quick walk back to the car, and back to the YSS in time for a shower, a trip to the pub and an early drive home. 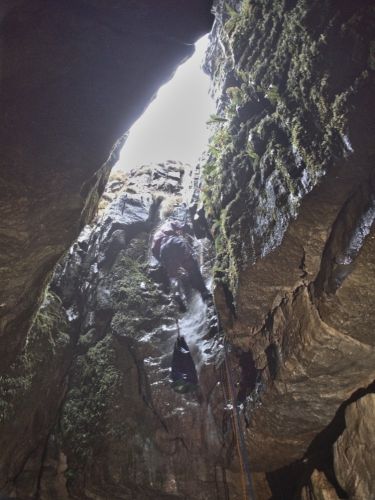