Overall, an absolutely fantastic trip! Kev's beat me to it so I'll just add a few bits rather than repeating everything he wrote!

The day started fairly badly, having not had much sleep, being slightly achy from a day's digging and having a horrible cold, but the smell of damp caving gear increased my enthusiasm no end and off I went to the Shell garage to await my lift from Andy & Kev. 20 mins and a phonecall later they turned up (10 to 8, Kev?!) reportedly due to a certain Mr Francis showing a reluctance to wake up... Packing was all fairly efficient although a nice caravan in front of us on the drive made up for the earlier efficiency. Another feature of the driving appeared to be motorcyclists with death wishes - 3 abreast isn't particularly enjoyable along some of those roads!

Plenty of faff followed, especially with the epically long change at the entrance which kev's maps and compass (despite it's slow motion tendancies...) had made much easier to find. Having said that, it was lovely and warm and good to enjoy the sunshine. I gave my camera to Ade knowing he'd take plenty more photos than I would (well over 150 in the end1) and we finally entered. Immediately I remembered how nice it is to rig on p-hangers :) much less paranoia required than for spits! Rigging the top traverse was great fun once I'd remembered how to rig again, although as Kev mentioned, it looked slightly exposed if you wanted to do the 90m free hang and bolts would definitely be needed. Possibly one for another time though as it would be an absolutely amazing descent.

Reaching the ledge (which was much less exposed than I expected) the traverse along was fairly uneventful and nice to rig with the brand new rope. The issue arose on the way down when the combination of new rope and no weight of rope below me meant a braking crab plus rack would have been useful, so a pretty short time later I was at the bottom, where (as already mentioned) there is a rather impressive snottite formation to be found...

For the next pitch a bend & twist are useful - there's one bolt in place but there are a couple of other spits around which are handy. The description describes it as free climbable, but for the ways we found that would only have been the case on the way down! The sump was pretty pathetic to be honest but if it was up at the high water mark it'd make a massive lake which would have been much more impressive!

A very efficient and uneventful derig and descent saw us ready for the walk down. This is a trip that definitely makes the walk worthwhile! 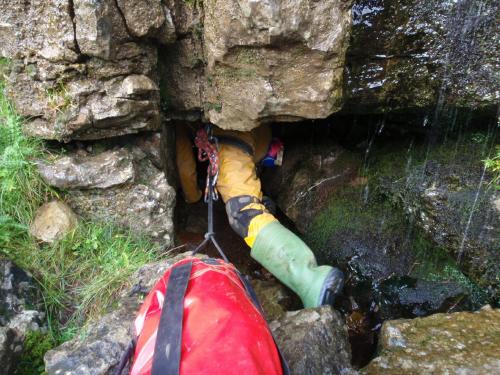 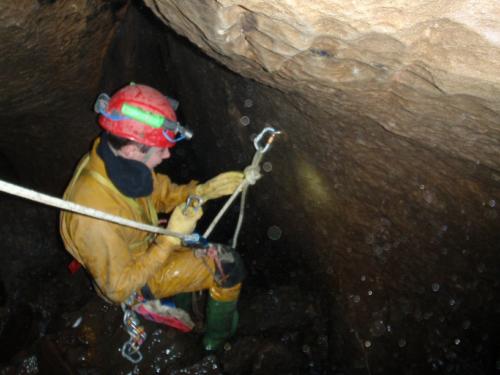 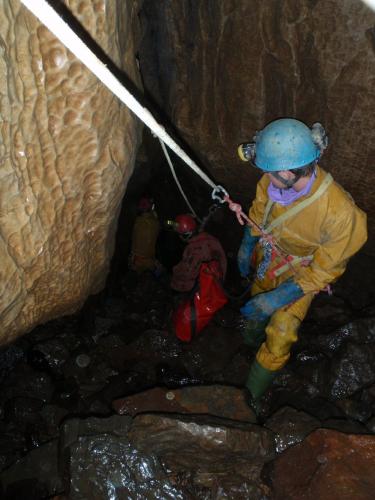 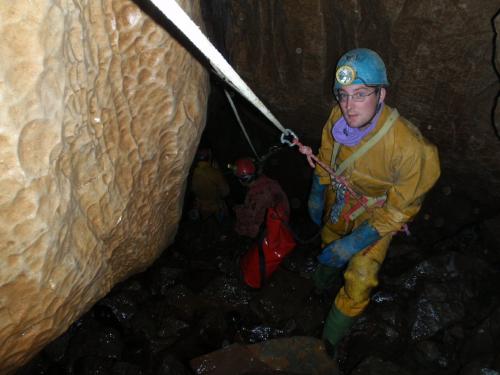 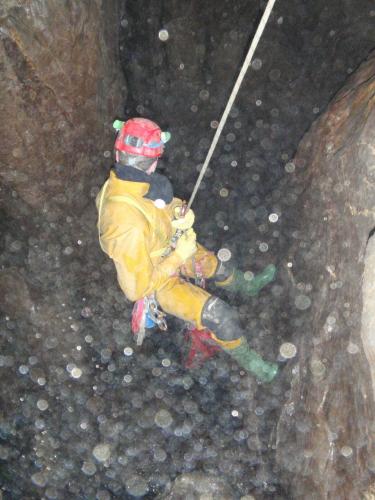 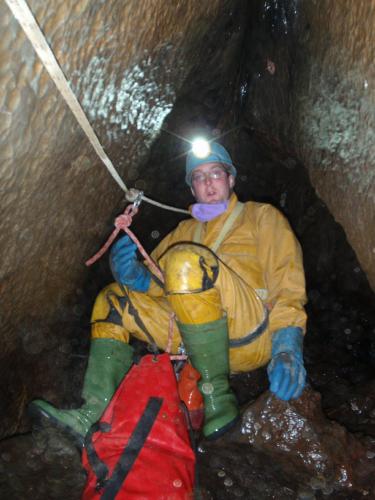 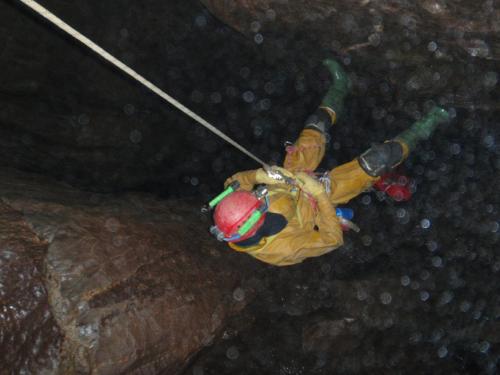 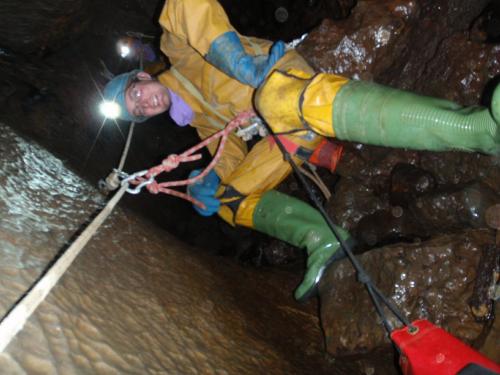 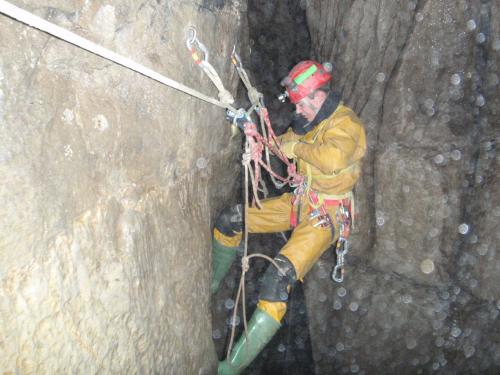 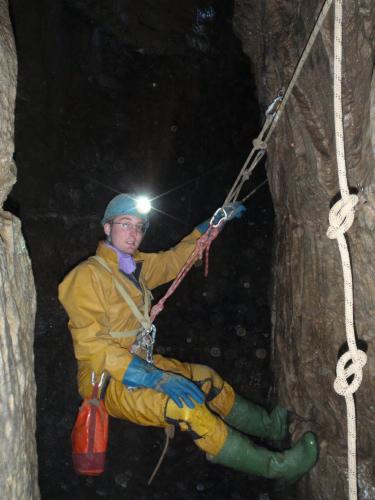 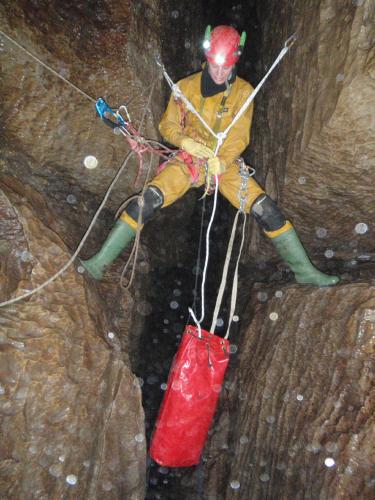 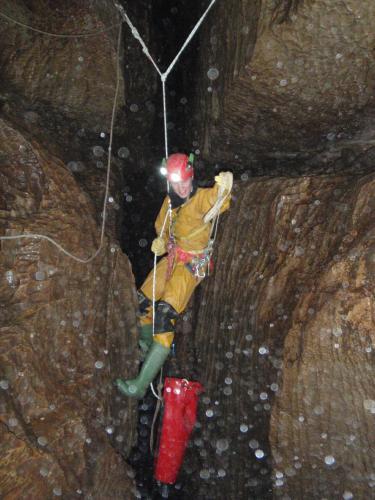 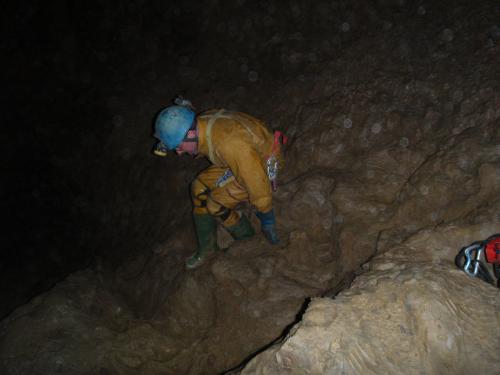 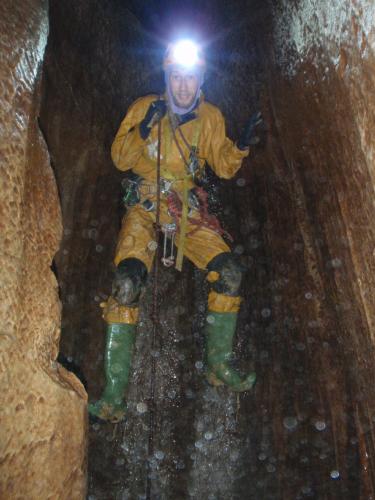 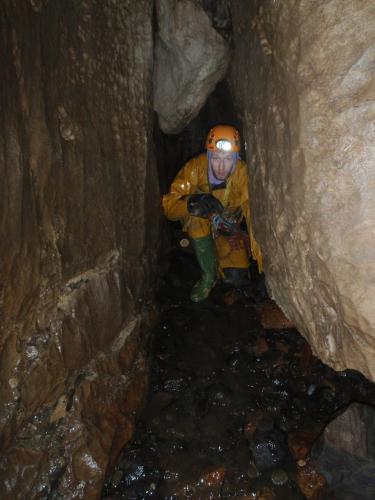