On a cold winter day with snow covering the Northern hills that my heart calls home, Leika and I made our way up the fell towards the frost bitten trees that dress the aged brow of Marble Steps. The familiar view across England and out to the coast from here bore a steely grimace as the country felt the full grip of the almighty chill. Marble Steps Pot can drain a massive amount of water in wet weather but on this day the water was frozen still and the moss and fern that cling to the periphery of the rocky entrance were frozen, caught like prey in an icy web. Large icicles added further decoration to the sparkling cold entrance with one being particularly oddly shaped and larger than the rest; it had grown in a fashion similar to the shape of a Jenga tower but with each stacked layer twisted at an angle to those above and below. How an icicle could gain such a shape is not immediately obvious to me, I have never seen this effect before but such is the nature of caves, always home to the obscure and unexpected. I made my way to the edge and dropped the first pitch of the Gully route with its well-placed deviation. A large tree trunk was wedged some way down the pitch and had to be straddled and crossed to get to the hangers beyond. It stood in a precarious position, awaiting a future deluge to wash it further into the Earth. Further down, loose rocky debris that provides further evidence of a more turbulent nature to the cave in the rainy season had to be traversed to the final section of the pitch dropping us into the bottom of the entrance chamber.


We proceeded over roped climbs and under crawls beneath jammed boulders further into the cave where an unprotected and entertaining traverse leads onto the next constricted pitch-head. This was passed and after a further traverse the head of the biggest pitch “the ninety” was quickly upon us. This is a nice large pitch that lends an echo to your voice. Following this the last pitch in the cave with its awkward traverse at the top was reached. Natural belays in the rock allow some protection to be given to the tremendous reach across the drop that must be executed to rig the hang. The small tunnel at the bottom of the cave follows abruptly providing an unfitting end to such a fine pothole. On our way back up through the cave we saw quite a large bat fluttering around and eventually come to rest on the walls of the chamber at the bottom of the entrance shaft which I pointed out to Leika. After derigging the shaft we gathered up the gear and made our way down the hill under a fat moon with snow sparkling at the touch of our lamplight. 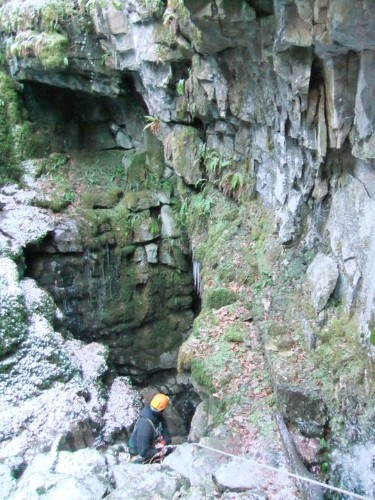