7:30am saw me trudging through the snow enjoying the sunrise over campus and seeing the lake frozen for the first time this year. We were off for a weekend of longer trips, with GG planned on the Saturday and Easegill on the Sunday. As there were only a few of us we thought we’d try staying at the NPC hut as it was pretty centrally located, and it turned out this was a pretty good decision…

The snow got thicker as we drove westwards, with all the roads bar the A65 still covered. We slid our way into Bernies and after a quick breakfast picked up the key to the NPC hut from the New Inn and found our accommodation pretty quickly. BPF may have been a bit ambitious in that weather! The hut seemed really nice at first glance, but we were in a rush so drove straight back to Clapham.

The change was chilly to say the least…possibly my coldest ever (until the evening!), but before long we’d set off after Jon who was off running for the day. Soon we were warmed up (too warm!) and we reached the entrance to just see the last of the group ahead of us heading down the entrance pitch (‘Ang on, I’m jus’ adjustin’ this Y-‘ang. Is tha’ areet wi’ yous?!?). After some pausing for playing with my new flash gun :) we were prepared to traverse around the left of the main pitch to go down SE Aven, but to our surprise no-one had rigged the main hang so we changed the plan and rattled down here instead.

From here on in, it was unchartered territory for me. We stooped through to SE Aven and as the description suggested, we ‘threw caution to the winds and hurled ourselves into the passage’. In reality, this was a bit less dramatic than it sounded and involved crawling…and a bit more crawling. It was probably fair to say that after several minutes of low crawling over gravel and through pools, morale was pretty low. Was this what was in store for the next 6 hours or so? Hopefully not.

We reached what we thought was the ‘wallowy section’ with an oxbow bypass, but the passage didn’t look especially wallowy to us, so Chad and I went different ways to see if they met up…I’m pretty glad I chose the left branch as Chad’s route through involved digging out foamy mud so he could fit…nice!

After this though, the passage soon got much much bigger and after passing the Disappointment inlet we’d reached Hensler’s Master Cave. Progress was quick through to the ladder and after a slightly bouncy ascent, we found ourselves sitting at the blow-hole. The furthest any of us had been before. Being the skinniest there, I was elected to go through first and despite looking a bit tight it wasn’t too bad at all. Once Cat had followed through I rushed forwards to get Echo Rift rigged, including the all important ExtraButterfly (TM) :) The rift really lived up to its name, and after snacks of crisps, rice with peas & salami, and coco pop bars we ditched our SRT kits and chose which canal to follow to reach the Southgate Duck which I think we were all a bit apprehensive about.

I confidently predicted the way on, and off we crawled through the slightly suspect smelling mud before the ceiling ominously lowered towards the water… Chad and I had a look round and it certainly looked a bit more sumpy than we expected. I optimistically had a bit more of a hunt round, but in the end had to concede defeat and go back the other way. A few minutes of wallowing in the other direction lead us to a diveline heading to the left…so this was it! Chad volunteered to go first and I followed soon after. The airspace was actually slightly more than it looked initially and it was possible to keep my helmet on and my mouth out of the water. Still a bit of a shock with the sudden ingress of water though! Eager to keep moving we crawled onwards with the next section of passageway certainly not making the duck seem worthwhile. On the plus side though, we had only been underground for about 2.5 hours by this point so our goal of reaching Mountain Hall was certainly looking achievable.

The pitch bypass was obvious to find and it was a welcome relief to crawl on some sand for a bit! At the boulder slope we weren’t quite sure of the way on, but the yawning black hole up to our left soon answered that. A slightly sketchy climb up saw us standing in the Mountain Hall…it was a bit difficult to appreciate the scale of the place, a) because it was so steeply sloping and b) because it was tricky to move around much because of the worry of knocking stuff down. Hopefully the photos show it reasonably though.

As we were ahead of schedule at this point (we’d only been underground for 3 hours) we thought we’d extend the trip slightly so on reaching 4 Ways Junction again we turned right with the aim of doing a little round trip via Eastern Way, Northgate and Sahara Passage. The passage got much nicer here with a fair amount of calcite, and after a brief look down the first Deep Well pitch we set off up Northgate…and we were really glad we’d come! There were loads of pure white formations completely untouched (and untaped) which made it well worth the effort. It was also the first time I’d seen a passageway with straws all the way across the ceiling – any significant amount of traffic would destroy them, so it felt as if it couldn’t really have changed since its discovery.

After a photo stop we started down Sahara Passage, knowing that the NFTFH description described it as having ‘several flat out squeezes’. It was easy going most of the way through (reminiscent of Daren, just after Hard Rock Café) but there was an interesting moment in the last of the squeezes. There was a slope down at the start of it which I went straight down, but my helmet and chest seemed to get wedged simultaneously! A minute or so of wriggling later I managed to get back up the slope and after removing my helmet and my camera from my pocket gave it another go. It needed a bit of digging, but after that it was pretty comfortable and we soon popped out into the first cross system.

After more food we rushed out towards the duck, all getting a bit chilly so doing our best to keep moving. I can honestly say that I enjoyed the duck on the way back too! I attempted to get a photo of it, but after sitting chest deep in water trying to hold the tripod still on the ceiling (I’d left my flash a t Echo Rift as the waterproofing was a bit suspect!) for a while my camera decided it had had enough so out we went.

The trip out was uneventful, but it was pretty bracing once we got outside to say the least. The change back at the car was…interesting… Various bits of gear were freezing to the ground and once changed, 5 layers still didn’t seem enough! Then it was back to the NPC hut for a fantastic spag bol and a chat with some of the Imperial guys staying there.

Shame that there was too much snow to get anywhere on the Sunday… had we realised we wouldn’t be going caving then maybe we could have done a bit more in the Far Country, but nevertheless it was a fantastic days caving and a great weekend overall :) 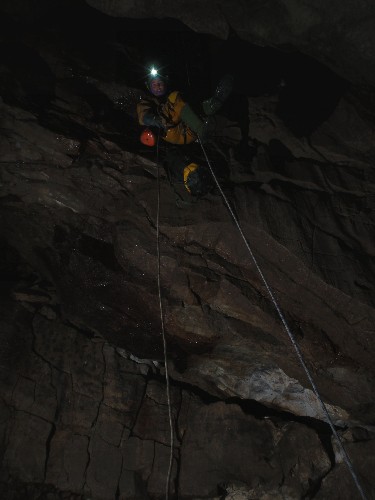 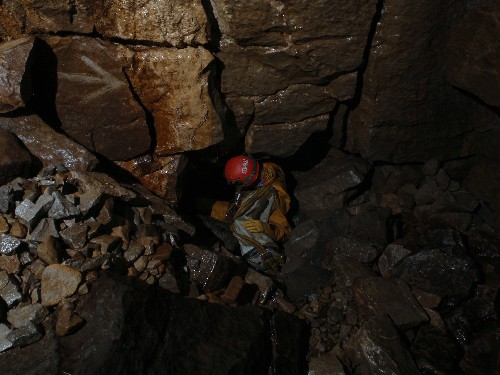 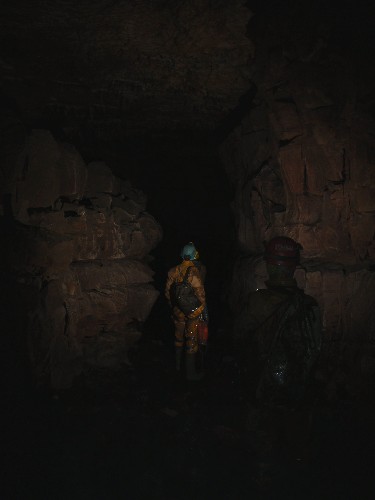 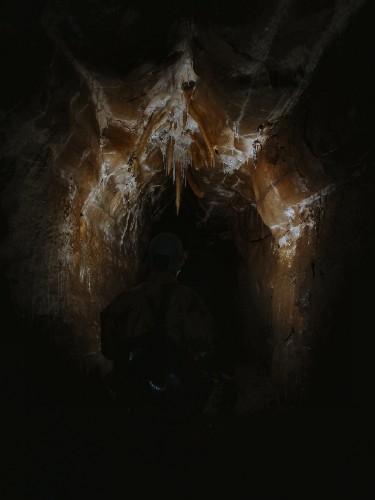 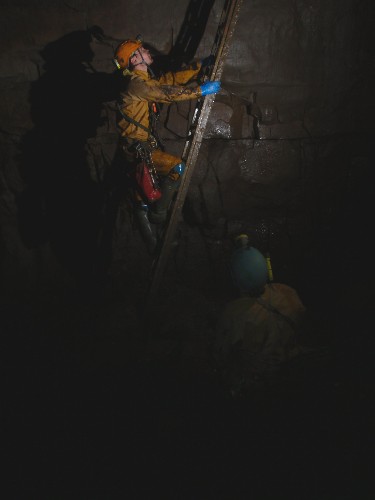 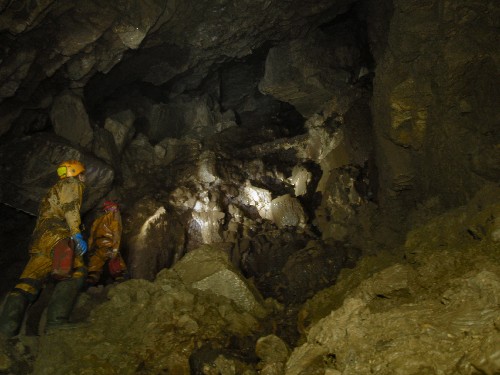 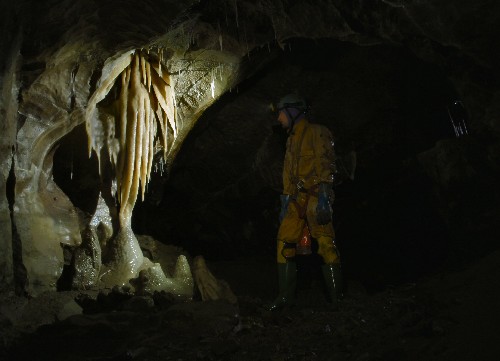 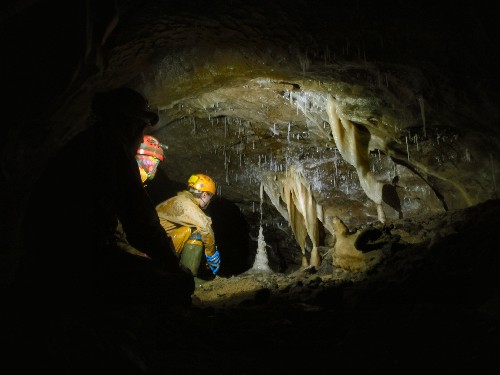 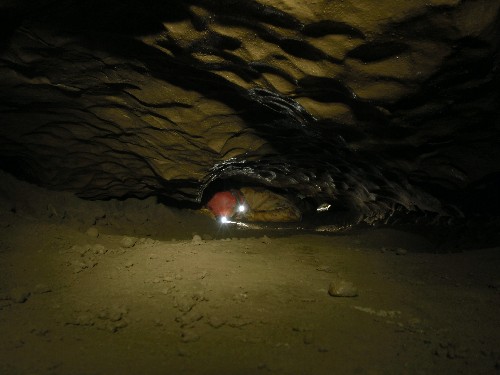 Other YUCPC reports on Bar Pot